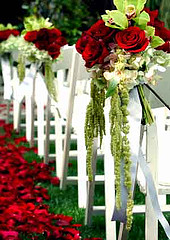 Whatever the reason, some brides often look for other options. These days, two alternative pieces get overused: Pachebel’s “Canon in D” and Purcell’s “Voluntary,” which is also attributed as “The Prince of Denmark’s March,” by Clarke. This became wildly popular after Princess Diana used it in her 1981 wedding to Prince Charles. Whatever you choose you have to have a short theme as the musicians need to be able to stop the music in the right place. Maybe try “Eleanor Plunkett,” by Turlough O’Carolan, paired with “Skyeboat,” a traditional Irish piece, as a processional, then “Hewlitt,” also by O’Carolan, as a recessional if you are a couple “who want to dance out of the aisle.”

• Hymn Fanfare from The Triumphant/Couperin

• La Cinquantaine (for the flower girl)

• To a Wild Rose/MacDowell (for the ushers)